My partner said he wanted me to have some genuine rest and relaxation before beginning the busy Fall season and that he knew just where we should go for a week or so in August.  So, we headed west from Madrid, spending one night in the beautiful city of Talavera de la Reina, before setting up camp near some of the most historical  towns in the interior of Portugal.

Just crossing over the border from Spain a bit above the Tagus River we arrived in the small town of Monfortinho known for its hot springs.  Considering the temperature that day was about 110 degrees we decided to move on to the charming town of Idanha-a-Velha.  This town of about 80 inhabitants was founded by the Romans and is rich in history.  We arrived fairly late for Portuguese lunch standards but we were bound and determined to find something to eat.  Filipe went into the one bar in the town to ask about a restaurant.  He came out with the information that the one restaurant in town was closed because they were in the main social hall serving the musicians that were in ldanha for a week long camp.  So, feeling positive and quite hungry we went down to the hall to try our luck. The man told us that they had a buffet set up just for the musicians but he consulted with the owner to see what he could do for us.  Five minutes later we were seated at a table and presented with quite a feast by smiling and gracious people. At the end of the meal we were even offered some local cheese from friends of the owner.  Seven euros for a meal of various grilled meats, local wine, bread, olives and as always in Portugal; salad, potatoes and rice.

Later on that afternoon we strolled through the beautiful streets down to the Roman Bridge and also listened to a practice concert  in the Visigoth Cathedral performed by the young people attending the music camp.  Right before leaving Ildanha-a-Velha we walked by the community oven as the woman was just opening the door.  She told us that they weren’t baking bread that day as it is only baked once a week but we did purchase some very crunchy cookies for our breakfasts.  The people in the town were so down to earth and friendly that for me it was the best way to begin our two weeks in the Alentejo region. 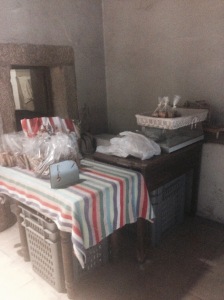 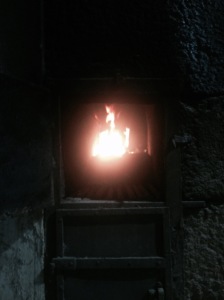 One thought on “Slow food and slow life…………”