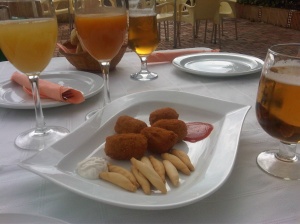 Sundays invite adventure and escaping from the city center.  Even though we all laugh and criticize the “domingueros” or “Sunday drivers”, we end up being one many times during the year.  So, today we went up just a bit into the mountains to breathe some fresh air and see what the day would bring.  Basically it is hard to go wrong around here on a weekend.  As long as you have good company and some open space for the kids to play, the day is pretty much set.  Lucky for me I have friends who also have a damn good sense of humor which makes the day just that much brighter.  Even with the clouds.  We ordered some food to share and then just as I was mourning the lack of homemade croquetas on the menu, this tapa appeared on the table.  It was as if they had read my mind.  My friend Annette and I both have a bit of an obsession with ordering homemade croquetas when available.  I think we are trying to find the best.  There is a lot to know about the “croqueta” in Spain.  Croquetas can be real crap sometimes.  Frozen and produced by a machine.  Or just plain bland, boring, and disgusting.  But,  when you find a good croqueta, it is like a delicious bit of fried love.

I was truly blessed to live with an amazing woman here in Granada.  Carmen taught me a great part of what I know about this city.  She hated to cook.  But her croquetas were seriously the best I have ever had.  I would hang over her as she made the bechamel, added the leftover meat from the stew cooked the day before and toss them in the egg and flour.  I watched the patience and love she put into those delicious rolls.  When they were ready we would all line up to taste as she fried them one by one.  I would always get back in line for seconds.  And with that bit of energy we would be off to go out for the night.

The croquetas today were homemade and fresh.  They weren’t as good as Carmen’s, nor where they as good as the one I will put in my next post, but they did hit the spot.  The company was even better…….a bit crazy……..but good. 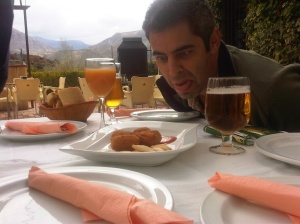