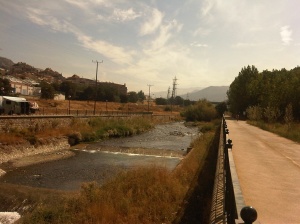 Ten years ago my sister Georgianna came to live with me for four months.  We had many wonderful moments that included sleeping on the beach, dancing on top of bars and enjoying lots of wonderful food.  We also took dance classes and did tai chi and yoga together.  But every once in a while my sister would wander off for a walk and adventures on her own.  My sister is one of those people who will talk to anyone and would always come home with  wonderful stories to tell.  One day she came back from a walk along the river with a bag full of quince.  A big bag.  She had met an older man along the river who invited her to look at his beautiful orchard and vegetable garden.  We had no idea what to do with the quince but we did go back and visit him several times.  He would offer us homemade wine with slices of ham as he told us his life story.  Pepe I believe his name was.  Pepe from the river we called him.

Since the school year began a couple of friends and I have been walking along the river every morning before I go home to do my yoga practice.  Yesterday as we admired the first snowfall on the Sierra Nevada, we were stopped by “Rafa”.  Rafa wanted to know if we were tired and proceeded to give us handfuls of a small little black fruit called Almencinas.  He told us to peel off the outer skin, eat the “meat” and spit out the rest.  He said the fruit was sweet and would give us energy.  So as we continued on with our walk we did as instructed.  The miniscule amount of fruit that each tiny ball offered was sweet but I’m not sure how much extra energy it gave us.  On our way back towards Granada we ran into Rafa again.  He told us more about his life, how he used to play professional soccer and how much he enjoys the outdoors and the mountains.  This morning as well we saw Rafa’s smiling face and he handed us more Almencinas to add to our piles.  We asked him about the difference between Endrinas (sloe berries) and the Almencinas.  He explained that the Almencinas are the fruit from a tree, the Almez and Endrinas are a berry. Endrinas are used to make Pacharán, which is for me one of the most delicious liqueurs ever made.  It is originally from Navarra in Northeastern Spain.  However, Rafa explained to us that the best Pacharán is made here in Granada in a mountain town called Monachíl.  He told us the name, Espino Negro, and that we definitely needed a bottle to help celebrate Christmas.  I think I will follow Rafa’s suggestion this year.

1 thought on “wise friends along the river…………”